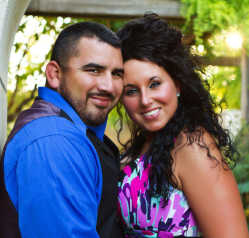 Wes and Colene Gress of Fort Scott, Kan., announce the engagement and upcoming marriage of their daughter, Stephanie Nicole Gress, to Frank Joseph King, son of Joe and Lisa Cuellar of Twin Falls, Idaho, and the late Margaret "Jeanie" King of Independence, Kan.

The bride-elect is a 2002 graduate of Fort Scott High School and a 2010 graduate of Missouri Southern State University with a Bachelor of Science in Criminal Justice.

The groom-elect is a 1998 graduate of Independence High School and a 2010 graduate of Pittsburg State University with a Bachelor of Science in Construction Management.

The couple will exchange vows on Nov. 11, 2011, at Broadway Baptist Church in Pittsburg, Kan.