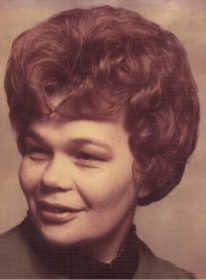 Mrs. McKenzie was born in Rich Hill and raised in the Metz, Mo., area, and graduated from Metz High School. After high school she worked in Nevada at Tate's Nursing Home. She met the man she would later be married to for over 56 years, Clinton McKenzie, at The Little White Diner which was located on the corner of Cedar and Walnut. She and Clinton lived in Michigan for a time, and later moved to Florida where she was employed at the first Kentucky Fried Chicken restaurant and worked with Colonel Sanders himself.

When they returned to Nevada, she helped her husband open Mr. Clinton's Salon in 1965, and later opened a salon in Butler, Mo. When a KFC restaurant was opened in Nevada, in the early 1970s, she took a position with them as manager. Joy owned and operated Joy's Chicken Inn next to the Ponderosa Motel, and later relocated to the Mitchell Hotel. She was in food service most all her life and owned and operated several restaurants in Nevada including Joy's Chicken Inn, Cedar Street Inn, and Nevada Deli.

She especially enjoyed bringing friends and family together with meals she prepared. Not wanting to face retirement in 2005 Joy took a position in food service at Cottey College which was a dream come true. Here her love of cooking could be satisfied and she enjoyed the atmosphere and the variety of cultures, often she commented that she wished she had found that position first in her life; she retired from Cottey in February of 2009.

Later in 2009 till her passing Joy had joined her husband Clinton at Mr. Clinton's Family Salon working side by side with him and proving that nothing was going to keep them down. Family was most important to Joy and the happiest pleasures of her lifetime were her grandchildren: Garrett, Grayson, Lauren and Grace and great--granddaughter Lilah. Joy and Clinton also had reared two sons in Nevada: Ron and James, as well as providing a home for several foster children. She attended Pine Street Baptist Church in Nevada.

Funeral services will be held at 1:30 p.m., Monday, Jan. 23, at Ferry Funeral Home in Nevada with the Revs. Chad Bailey and Mike Satterlee officiating. Interment will follow at Newton Burial Park in Nevada.

Friends may call now and until the hour of service at Ferry Funeral Home in Nevada, and the family will receive friends at the funeral home Sunday, Jan. 22, between 7 and 8 p.m.

Those who wish may contribute to the Vernon County People for Pets in care of Ferry Funeral Home, 301 S. Washington, Nevada.