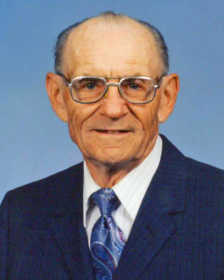 Howard married Agnes Laureta Workman on Oct. 26, 1941, at Columbus, Kan. He began teaching in 1943. He began teaching in rural Crawford County schools. In five of the schools he was the only teacher, instructing grades 1-8. He began teaching fifth grade at Eugene Ware School in Fort Scott in 1960. He remained there for 23 years. He retired in May of 1983, following 40 years of teaching. He said the qualifications for a teacher are, "To have the wisdom of Solomon and the patience of Job."

A good part of his retirement was spent building wind chimes and whirly gigs. He was an avid gardener and took pride in keeping his lawn in tip-top shape. Howard was a member of the Community Christian Church, Ideal Chapter No. 369 Order Eastern Star, Hiattville, and Masonic Lodge No. 93, Girard, Kan.

The Rev. Kevin Moyers will conduct funeral services at 10 a.m., Tuesday, at Community Christian Church. Burial will follow in the Hiattville Cemetery. The family will receive friends from 6 p.m. to 8 p.m., Monday, in the Cheney Witt Chapel. Memorials are suggested to either the Community Christian Church or Fort Scott Manor Activity Fund and may be sent to Cheney Witt Chapel, P.O. Box 347, Fort Scott, KS 66701.