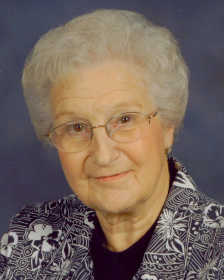 After graduating from Fort Scott High School in 1949, she then attended Fort Scott Junior College, and Pittsburg State University. She married Leroy Nicholas Ruhl on March 23, 1953. They later divorced. She worked for more than 20 years for Cullor Limestone Company as office manager. She managed Cavalry Crossing Apartments for the past 11 years. She greatly enjoyed helping the tenants who lived there while seeing to the upkeep and appearance of the facility.

Katherine was a member of Pioneer Kiwanis and the Fort Scott Chamber of Commerce. She loved watching football; both the local teams at Frary Field, and others on television. She liked to bowl. She looked forward to taking trips both with the JUCO and Citizens Bank Fun Seekers, especially to Branson for shopping. Spending time with her children and grandchildren was very special to her. She was a member of Community Christian Church and the U R Welcome Sunday school class.

The Rev. Tim Woodring will conduct funeral services at 10 a.m., Wednesday, April 11, at the Community Christian Church. Burial will follow in the Clarksburg Cemetery. The family will receive friends from 5 p.m. until 7 p.m., Tuesday, at the Cheney Witt Chapel. Memorials are suggested to the Sharing Bucket and may be left in care of the Cheney Witt Chapel, P.O. Box 347, 201 S. Main, Fort Scott, KS 66701.