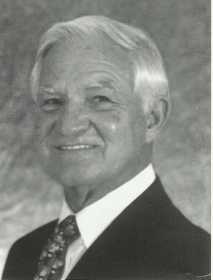 Dr. Robert George Hatten, 87, of Butler, Mo., was taken on eagle's wings just as the sun rose on Aug. 13, 2012, surrounded by his loving family. He was a true gentleman and a honorable person with a firm handshake.

Dr. Hatten, affectionately known as "Poppy" and "Doc" by so many, was born on Sept. 13, 1924, in Independence, Mo., to the late Okia Belle Campbell and George Washington Hatten. He proudly served his country in World War II in the 511th Parachute Regiment where he assisted in the liberation of the Los Banos Prison Camp, saving thousands of lives. He graduated from Cleveland Chiropractic College in 1949 and opened his practice in Butler, Mo., where he practiced for 63 years, recently celebrating with his son, Dr. Robert L. Hatten a combined total of 100 years of primary care as chiropractic physicians.

He married his loving and devoted wife, Lillie Helen Roth of Columbus, Ohio, on March 9, 1944, after a whirlwind romance that began on a World War II troop train. Their 68 years of married life made for a treasury of wonderful stories and memories. They are a shining and true example to their many family members and friends.

God gave him an inordinate amount of energy, good health, and time to give back to his community. He served on the Butler City Council, the Butler RV School Board, was president of the Junior Chamber of Commerce, president of the Butler Lions Club, Commander of the American Legion, an original Board Member of Butler Enterprise Corp., Worshipful Master of Butler Masonic Lodge, and a current member of the Board of Directors of Community First Bank. He has served as an elder at the Butler Presbyterian Church. His activities with the youth of Butler, include co-managing Foodtown Little League Baseball, an assistant Scout Master and a Sunday school teacher.

He served six years on the Board of Trustees of Cleveland Chiropractic College, where he was honored to receive the Alumnus of the Year Award in 1984, in recognition of his generous commitment and dedication to the college. In 2003, he was designated as a Cleveland Star and is a member of the Ambassadors Society of the College. He is a fellow of the International College of Chiropractic, a member of Chiropractic Knights of the Round Table, and a member of the Missouri State Chiropractic Association.

In his leisure time he could be found golfing or fishing, with his favorite fishing spot being Rusty's pond where he had his own bench with his name on it. He was a story teller extraordinaire and recorded his World War II memories for the Truman Museum in Independence. Children and grandchildren value special trips taken, but especially quieter moments that shaped their values and outlook on life. This world cannot contain the love for this fine, principled man who was truly a class act. His passing will create a void in our universe.

Memorial services for Dr. Robert G. Hatten will be 1:30 p.m., Thursday, Aug. 16, at the Butler Presbyterian Church in Butler, Mo., with the Revs. Dick Pierson and Ron Galvin officiating. Visitation will be Wednesday from 5-7 p.m., at Mullinax Funeral Home in Butler, with rose ceremony following visitation at 7 p.m. Committal with U.S. Army honors will be in Oak Hill Cemetery, Butler.

In lieu of flowers, contributions may be made to Cleveland Chiropractic College or Ararat Shrine. Messages of condolence may be left for the family at www.mullinaxfuneralhome.com.