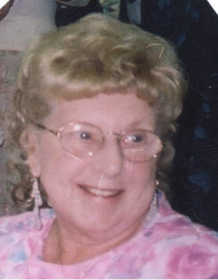 Daphne M. Wayne passed away peacefully after a long and courageous battle with cancer at the age of 78. She was reunited with her husband, Daniel, on Aug. 11, 2012.

Daphne was born in Norwich, England, to Reginald and Lilian Keymer on Aug. 12, 1933. She has lived in the United States since 1972.

Daphne worked at Heartland Hospital for many years. She was also co-owner/operator of the local hotel -- Wayne's Hotel. She was very well known in the community of Nevada and will be sorely missed by all, especially her close and dear friends, Dean and Betty Lewis.

Instead of flowers, donations may be made to any cancer center in memory of Daphne in care of Ferry Funeral Home.