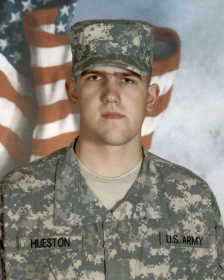 Spc. Justin Michael Hueston, 22, a resident of Mapleton, Kan., died Tuesday, Sept. 25, 2012, at the Research Medical Center in Kansas City, Mo., following injuries received in a motorcycle/auto accident earlier in the day. He was born Nov. 15, 1989, in Fort Scott, Kan., the son of Michael R. Hueston and Ginger E. Button Hueston. He graduated from Uniontown High School with the class of 2008. He was a member of FFA, FCA, football, band, choir, KAYS, and Upward Bound. He married Katie Lynn Oharah on Oct. 11, 2008, at Fort Scott, Kan.

Justin served his country in the National Guard with the 891st Engineering unit from Iola, Kan. He was deployed in Africa with the 1161st unit out of Hutchison, Kan. He was an EMT for Vernon County, Mo. He was a volunteer firefighter and served as Assistant Fire Chief in Mapleton. He was a member of the RIT team, and also worked construction when he had time. He worked as a lab assistant at Fort Scott Community College for EMS training, and previously in the maintenance department. He had also worked at Topco Laminates in Fort Scott. He enjoyed participating in tractor pulling and his new truck. He was a member of the Red Knights motorcycle club and a member of the Mapleton United Methodist Church. Justin was always helpful to anyone requiring his assistance. He loved spending time with his family, especially his children. He will be greatly missed.

The Rev. Glen Duderstadt will conduct funeral services at 1 p.m., Saturday, Sept. 29, at the West Bourbon Elementary School gymnasium in Uniontown. Burial will follow in Mapleton Cemetery. Military honors will be conducted by the Kansas Army National Guard. The family will receive friends from 5 p.m. until 7 p.m., Friday, at the Cheney Witt Chapel. Memorials are suggested to either the Colby and Paityn Hueston Scholarship Fund or Vernon County Ambulance District Toys for Tots, and may be left in care of the Cheney Witt Chapel, P.O. Box 347, 201 S. Main, Fort Scott, KS 66701.

Condolences may be submitted to the online guestbook at cheneywitt.com.