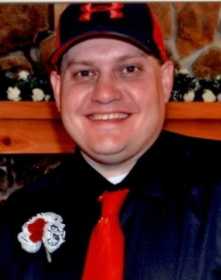 He attended school in Germany and El Dorado Springs.

His son, Cody was his life. Steven and Cody enjoyed many of the same things. As Cody excelled at football, you could see the pride and joy on Steven's face. Their goal together was for Cody to earn a scholarship and play football at Missouri University.

On March 31, 2012, Steven married Desiree' Shannon. He worked at 3M, Nance Auction, and recently had his own business with his wife called "That 1 Store."

Words that might describe Steven would be: loving, caring, ornery, stubborn, the twinkle in his eye, and his sense of humor. Anytime Steven was around, he tried to make sure everyone else was having a good time. Items that express what Steven was all about would be: Coins, Bud Light Lime, a pack of Camels, hoodies, and anything with the Under Armour brand name on it. He loved Under Armour so much, he incorporated it in his wedding. He also enjoyed hunting, football, baseball, auctions, bartering, Mizzou, and the St. Louis Cardinals.

Preceeding him in death were his grandparents, H.J. and Betty Gunder; grandmother, Mary Fisher; and uncle, Arnold Smith.

Steven is survived by his wife, Desiree'; his son, Cody; three stepchildren, MaKayla, Braden and Kayli; his parents, Rick and Eileen Gunder; his brother, Tim Gunder; his nephew, Calbi; and numerous aunts, uncles, cousins, and many friends.

In lieu of flowers, memorial donations may be made to Cody Gunder College Fund and left at the funeral home.

Online condolences may be left on the funeral home's Web site at: www.blandhackleman.com