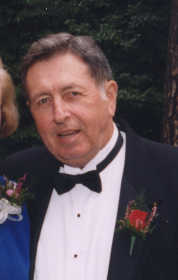 Bert was raised in Aberdeen, S.D., and graduated in 1949 from Central High School in Aberdeen. In 1950, he enlisted in the U.S. Air Force retiring after 20 years of service in 1970 with the rank of Major. Bert flew an F-4 Phantom Fighter in 144 combat sorties with 100 missions over North Vietnam in 1967/1968. He was awarded The Air Medal on Feb. 5, 1968, and The Distinguished Flying Cross on May 15, 1968. He worked as a corporate pilot for Farm & Home Savings & Loan for 19 years, retiring in 1989. Bert was a lifetime member of the Red River Valley Fighter Pilots Association, a lifetime member of the Nevada Elks Lodge No. 564, a lifetime member of the VFW, and a member of the Nevada Country Club. He enjoyed pheasant hunting in Iowa and South Dakota and playing golf.

Funeral services will be held at 2 p.m., Tuesday, Feb. 5, at Ferry Funeral Home, Nevada, with the Rev. Greg Ferree officiating. Interment will follow in Newton Burial Park, Nevada. Friends may call now and until the hour of service and the family will receive friends from 1-2 p.m., Tuesday, prior to the service at the funeral home.

Contributions to the Alzheimer's Association in care of Ferry Funeral Home, Nevada.