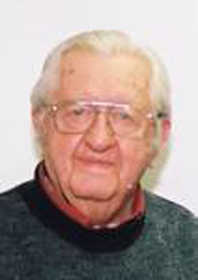 The Rev. Orville "O.V." Verdayne Dodson of Willard, Mo., passed away Sunday, Feb. 10, 2013, a few days after celebrating his 99th birthday with family.

The Rev. Dodson, the son of Famous Lisbon and Birdie Oaks Dodson, was born in Barry County, Mo. He attended Barry County public schools and graduated from Kimberly High School in Idaho in 1932. He received his Associate of Arts from Southwest Baptist College in 1942, his Bachelor of Arts from Oklahoma Baptist University in 1944, his Bachelor of Divinity and Master of Theology from Southern Baptist Theological Seminary in 1948.

After accepting Christ as Savior at an early age, he made an unreserved commitment of his life to Christ and surrendered to the pastoral ministry in 1933. He was ordained by the Fairview Baptist Church in 1935. He preached and pastored churches in Barry County and taught in rural schools for six years. Following seminary he pastored Cassville First Baptist for seven years and was pastor at Nevada First Baptist Church from 1955-'79.

Upon retirement in Nevada and moving to Willard, he served as both interim and associate pastor at Grant Avenue Baptist Church in Springfield for 10 years and also at Willard First Baptist until 1996. He was honored by First Baptist, Nevada, as pastor emeritus in 2001. O.V. was privileged to preach in revivals throughout the Convention and traveled around the world in connection with the Australia preaching mission in 1964.

He was a member of the 50-Year Club as an alumnus at Southwest Baptist University and was a Life Service Award recipient. He served as a trustee at SBU and at Golden Gate Seminary. O.V. was a member of the executive board of the Missouri Baptist Convention for a total of 16 years.

He was preceded in death by his parents; two brothers, Mack and Jack Dodson; two sisters, infant Mary Irene Dodson and Bonnie Erickson; and his wife of 58 years, Elaine.

Services were held on Thursday, Feb. 14, 2013, at 11 a.m., at the First Baptist Church, Willard, with Steven D. Mills officiating. Interment followed in the Wesley Cemetery, north of Willard.