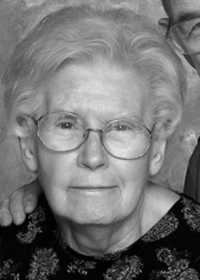 Helen was raised in Nevada and graduated from Nevada High School in 1950. She was a member of the Nazarene Church in Nevada and worked for many years for Key Industries. Helen had lived in Little Rock since 1957 where she worked for National Food Stores, Weingarten's, Inc., and Maybelline until her retirement.

Survivors include her husband, Bill Webb Jr., of the home; her sister-in-law, Judy and husband, Jim Wheeler, of Sherwood, Ark.; nieces, Pat Arnold and her husband, Frank, Nevada, and Marlene Stewart, Callahan, Fla.; one nephew, Charles Scott, Colfax, Wis.; and several great-nieces and nephews. In addition to her parents, she was preceded in death by her brother, Clifford Church and one sister, Margaret (Church) Scott.

A graveside service will be held at 1 p.m., Thursday, March 7, at Moore Cemetery in Nevada. Friends may call now and until 12:30 p.m., Thursday, at Ferry Funeral Home, Nevada.