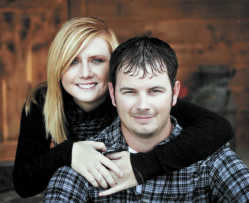 Andy and Polly Dockery of Nevada announce the engagement of their daughter, Lauren Kathleen Dockery, to Lyman Zebulon Williams of Moundville, son of Bill Williams and Sandy Ashcraft of Nevada.

Lauren is a 2009 graduate of Nevada High School and a 2012 graduate of Missouri Southern State University with a bachelor's degree in animal science.

Zeb is a 2001 graduate of Nevada High School and is currently employed by Farmer's Ag and Grain.

The couple plans to be married on Aug. 17, 2013, at the Northwoods Chapel in Nevada.