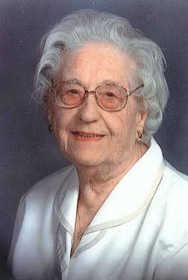 She was educated by the Benedictine Sisters of Atchison, Kan., at St. Peter's Elementary and High School in Mercier. Alice managed the family grocery business when needed and worked in the U.S. Post Office at Mercier.

On Feb. 28, 1932, Alice was married to Walter A. Roeder of Seneca, Kan. They eventually established Roeder Refrigeration in Nevada and remained in that business until Walter's death in June of 1971. For many years Alice gave private piano lessons in her home.

Alice was a member of St. Mary's Catholic Church and St. Mary's Altar Society. She served as sacristan caring for altar linens and vestments, assisted with church dinners and directed a choir at the church.

She is survived by a daughter, Gwen, and son-in-law, Dr. Frank Schoolcraft; a brother-in-law, Ray Roeder of Bella Vista, Ark.; and by many beloved nieces and nephews. She was preceded in death by her cherished husband; her parents; three sisters; and four brothers.

The rosary with visitation is scheduled for Tuesday, Aug. 6, at 11 a.m., followed by Mass of Christian Burial at noon, at St. Mary's Catholic Church, with the Rev. Matthew Benjamin officiating. Burial will follow in Mt. Calvary Cemetery, Nevada.

In lieu of flowers, masses may be scheduled at St. Mary's in memory of Alice.