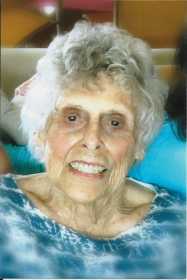 Ardelle Holler Whitehead, 89, passed away Sept. 7, 2013, in Springfield, Mo. She was born on July 17, 1924, in Nevada, with her twin sister, Clarabell Holler, who preceded her in death in 1993. She was the daughter of Lutie Edna Bridges and Robert Holler.

She was a graduate of Nevada High School and attended Midland Communications School in Kansas City, Mo. From there she was hired by Eastern Air Lines and worked in San Antonio, Texas, Chicago, Ill., Tampa, Fla., Nashville, Tenn., and Indianapolis, Ind.

Ardelle married Alfred Whitehead in 1947, who passed away in 1983. She was a member of Wesley United Methodist Church, The Mary Lea King Circle. She was active in Girl Scouts and was an affiliate of Beta Sigma Phi Sorority for many years.

Burial will be private in Newton Burial Park, Nevada, under the care of Gorman-Scharpf Funeral Home in Springfield, Mo.