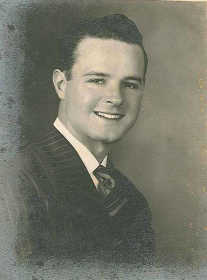 Howard Udene Dale, 93, passed away peacefully on April 20, 2013, at the Missouri Veterans Home in Mt. Vernon, where he had been a resident for the past eight years. Howard grew up in Vernon County on the family farm of his parents, Isaac Francis "Frank" and Anna Dale. He graduated from Nevada High School in 1938 and earned a degree in animal husbandry from the University of Missouri-Columbia.

Howard was forever a stockman and farmer. Howard raised White Faced Hereford and Black Angus cattle, Missouri Hampshire's, as well as growing all the crops to feed his livestock on the rolling green pastures of Dale Farms near Milo, Mo. His passion was being on the land, raising crops, and caring for his animals. His capabilities were broad, including being a GI Teacher after the war, a skilled carpenter, a keen engine mechanic, a Sheldon school board member, Boy Scout troop leader, and Sunday school teacher. He loved kids, horses, cattle, farmland, cooking, and raising fresh vegetables in his many gardens. His plan to become a farm animal veterinarian while attending MU was interrupted by World War II.

Howard served in the United States Army as a medical corpsman, 1st Medical Squadron, First Calvary Division with General Douglas MacArthur in the South Pacific from Oct. 16, 1942, until after war's end in Sept. 25, 1945.

Battles and campaigns against the Japanese included New Guinea, Bismark Archipelago, Southern Philippines, and Battle of Luzon to name a few. Decorations and citations included the Philippine Liberation Ribbon with two Bronze Service Stars, and Good Conduct Medal. The Bronze Star Medal was awarded for courage and ability leading his squad under fire by continuing the evacuations of wounded soldiers while he ventured into danger against the enemy at Luzon Island Philippines.

After the war, Howard continued to farm and raise livestock as well as working 25 years as a Rural Letter Carrier for the U.S. Postal Service. He married Evalyn Jo Willsey of Metz, Mo., in 1945, spending 45 years together and raised a family of two boys and daughter. Taking annual family vacations to the Colorado Rockies to camp and traveling to southern Missouri Ozarks Lake country were a family tradition.

Howard was an avid outdoorsman and loved to fish for largemouth bass in Missouri lakes and ponds. He enjoyed upland bird hunting for Bobwhite quail along with his faithful English pointer, Lady. He was a lifetime member of the Elks Club, the Baptist Church, and a member of Veteran of Foreign Wars (VFW) local lodge. He retired from his civil service position and farming to pursue a second career in real estate sales. He was successful in selling farms and ranches in and around western Missouri, keeping his connection to the local farmers he knew and the land he loved.

Howard was preceded in death by his son, Frank Dale; grandson Scott Crothers; parents Isaac Francis and Anna Dale; older brother, Robert Dale; older sisters, Gladys Wisehart, Irene Cooper; and twin sister, Helen Somerville. He is survived by his daughter, Lin Gray; son, Jim Dale; and granddaughters, Sydney, Jessi, and Chloe Dale. Family was number one to Howard; always taking care of his children, grandchildren, numerous nieces and nephews was his priority. All who knew or met Howard have colorful memories of his humor, joy, honesty, and wisdom. He lived a full and long life and will never be forgotten by those who loved him.

A memorial service will be held Saturday, Sept. 14, at 11 a.m., at Sheldon Cemetery, in Sheldon. In lieu of flowers, memorial donations may be made to the Sheldon Cemetery in care of Ferry Funeral Home.