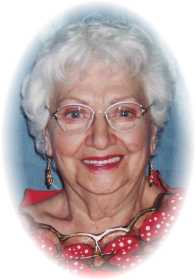 She is survived by her daughter, Shirley Trane (Gerald); her son, Michael Kennedy; granddaughter, Michelle Stevens (Timothy); and great-grandchildren, Tyler Kennedy, Elora Kennedy, and Krista Stevens. She is also survived by many nieces, nephews, great-nieces and -nephews.

Mabel was a loving mother, grandmother, aunt, great aunt and "Grandma YoYo" to her great-grandchildren. She was also a cherished caregiver to her community and church, St. Margaret's Episcopal Church. She was known far and wide as "Miss Mable". Mabel grew up as a farm girl in Metz, Mo., where as a teenager she played on her high school championship basketball team. As a young woman during World War II, she was a "Rosie the Riveter" employee at Beechcraft AirCraft factory in Wichita, Kan.

Miss Mabel spent most of her adult life in Kansas City, Mo., before moving to this area in 1997 to be closer to her family. She was an excellent seamstress, avid bowler, and superb cook and baker. She loved taking care of her family. Her St. Patrick's birthday celebrations were always a highlight for her family and friends. Mable lived life to the fullest until the very end. A memorial service will be held on Saturday, Oct. 5, at 10 a.m., at St. Margaret's, 75 Pine Avenue, Fleming Island, Fla., with the Rev. Celeste R. Tisdelle officiating. A reception will follow after the service in the parish hall.

In lieu of flowers the family asks that donations be made in her memory to Haven Hospice, 745 Blanding Blvd. Orange Park, FL. 32073. Sign the family's online guest book at www.broadusraines.com.