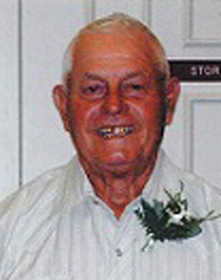 Pete served in the United States Army and then worked as a carpenter. He loved the outdoors and enjoyed fishing, coyote, squirrel and coon hunting and raising cows. Pete also enjoyed spending time with friends and family. He was known to be a good storyteller. Pete was a member of the Carpenters' Union of Kansas City, and both the Masonic Lodge and the American Legion, Arcadia, Kan.

Pete was preceded in death by his parents; his wife, Patsy; one son, David; his brother, Claude; and his sister, Lois Virginia.

Graveside services will be held at 10:30 a.m., Saturday, Oct. 5, at Shiloh Cemetery, Barton County, Mo., with the Rev. Bill Smith officiating. Visitation will be held from 6 to 8 p.m., today, at Ferry Funeral Home, Nevada.

Contributions may be made in his name to Shiloh Cemetery in icare of Ferry Funeral Home.