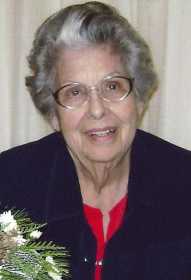 Thelma was a graduate of Richards High School in 1945, where she was a proud member of the Richards girls basketball team. After graduation she moved to Fort Scott, Kan., with her sisters where she then worked at the Egg Hatchery and Key Work Clothes. After her marriage she then took on the hardest job of all: raising five kids and being a farm wife.

Thelma is survived by five children, Barbara Dilly, Everett Leon Wolfe and his wife, Rita, Steven Wayne Wolfe and his wife, Terri, Vickie Erwin and her husband, Jim, and Tena Tyler and her husband, Ed; one brother, Melvin Higgins; a sister, Ida Lee Daniels; nine grandchildren that she was so proud of, Kevin Dilly, Amy Dilly, Anthony Wolfe, Marlene Hogan, Cory Erwin, Zachary Wolfe, Stephanie Hackman, Lane Baker and Kerbee Tyler; 10 great-grandchildren; four great-great-grandchildren; and several nieces and nephews. Thelma was preceded in death by her husband, Everett "Daddy" as she called him; a son-in-law, Ted Dilly; six sisters; and one brother.

The Rev. Mark Mitchell will conduct funeral services at 10:30 a.m., Thursday, Nov. 7, at the Konantz-Cheney Funeral Home with burial following at the Deerfield Cemetery, Deerfield. The family will receive friends from 7 to 8 p.m., Wednesday, Nov. 6, at the funeral home. Memorial contributions may be made to Mercy Transportation and left in the care of the Konantz-Cheney Funeral Home, 15 W. Wall St., P.O. Box 309, Fort Scott, KS 66701.

Condolences may be emailed to expressions@konantz-cheney.com.