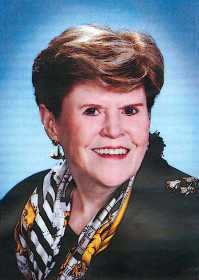 Kathryn Viola Rasmussen joined her savior on Aug. 11, 2013, in Denver, Colo., after a short hospitalization, due to a rare lung condition. Kathy Z, as she was known to her Mary Kay family, was survived by her husband, Dale, with whom she recently celebrated her 50-year wedding anniversary.

Other survivors are her daughter, Julie Rasmussen, of Colorado; and her son, Eric Robert Rasmussen, of Virginia. She is also survived by her brother, Bob Middleton, of Dallas, Texas; and her nieces and nephews, Christy Reese, of Frisco, Texas, Mike Middleton, of Coppell, Texas, Cathy Jurgensmeyer, of Kansas City, Kan., and Jason Middleton of Evergreen, Colo.

Kathy was born in Nevada, Mo., on June 3, 1942, and she graduated from Nevada High School. Kathy spent her early years on College Street near the Methodist Church where her parents, Floyd and Viola Middleton, were active leaders. After graduating from Missouri State University, Kathy and Dale spent time in Dallas, Texas, while Dale was securing his Ph.D. and served as Dormitory Counselors in SMU's McElvaney Hall. While in Dallas, Kathy and Dale were active members of Lover's Lane Methodist Church. In 1969, Dale was recruited to the CIA and they moved to McLean, Va. Kathy was recruited to Mary Kay sales by her mentor, Sue Z. Vickers. As she began her career she became a lifelong mentor to many women, and, in the process she achieved the highest level, National Sales Director. Kathy became certified in Meyers-Briggs to better help those who worked with her.

In addition to traveling the world with her Mary Kay family, she was always active in the Trinity Methodist Church of McLean where the memorial service celebrating her life was held on Aug. 24. This service was well attended by friends, family and more Mary Kay Cadillacs than could be counted. Kathy and Dale's home was a center of activity in McLean for more than 40 years, where all were welcome.

Kathy will be remembered for her positive attitude and always seeing the best in others, for always being there for friends and family and for helping others capitalize on their talents and overcome their weaknesses.