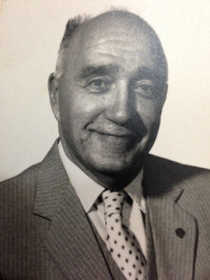 The Rev. Dr. Frank Claiborne, son of Jord M. and Cynthia Jane Williams Claiborne, was born in Nevada, Mo., on Sept. 23, 1925, weighing in at two and three-quarter pounds. He died on Jan. 19, 2014. During Frank's first hours of life, his hands were so small that they could pass through his father's wedding band. During his final hours, his hands were clasped with Idavee, his loving wife of more than 66 years.

Frank graduated from Nevada High School in May of 1943. He enlisted in the United States Navy the following July and was discharged in 1946. After their marriage in 1947, he and Idavee attended Southwest Baptist College in Bolivar, Mo., and later, Frank attended Ouachita Baptist University in Arkadelphia, Ark., and Central Baptist Theological Seminary in Kansas City, Kan. Frank was awarded an honorary Doctor of Divinity degree from Southwest Baptist University in 2006.

The Rev. Claiborne, or Brother Frank, as he was known to many people, lived a life of joyful ministry. He first became a pastor in 1948, ordained by Pine Street Baptist Church in Nevada, Mo. Over the years, he helped start more than 48 churches in Missouri and Kansas. Frank and Idavee were missionaries with the Home Mission Board of the Southern Baptist Convention.

Brother Frank held many titles, including pastor, chaplain, superintendent of missions, director of missions, and church starter strategist. Whether clasped in prayer, reaching out to someone in need, or turning the pages of his treasured bible, the Rev. Dr. Frank Claiborne's hands were those of ministry.

Brother Frank touched many lives in each community he served, including Appleton City, Mo.; Republic, Mo.; La Plata, Mo.; Springfield, Mo.; Bevier, Mo.; Topeka, Kan.; and northeast Kansas. Together we remember Frank Claiborne as we celebrate the reach of those once tiny hands.