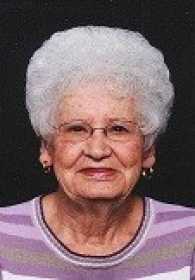 Betty grew up in Nevada and attended Nevada schools. She was a lifelong resident of Nevada. Betty worked at Keys Work Clothes, Kresses Department Store, Bob's Shoe Store, Nevada News, and Country Inn & Suites. She was a homemaker. Betty enjoyed camping, shopping -- especially garage sales, most of all she enjoyed her grandchildren and all of the holidays.

Funeral services will be held at 10:30 a.m., Wednesday, Feb. 19, at Ferry Funeral Home, in Nevada, with the Rev. Ron Dunlap officiating. Interment will follow in Moore Cemetery, Nevada. The family will receive friends from 6-7 p.m., Tuesday, at the funeral home.

Contributions may be made in Betty's memory to the American Cancer Society in care of Ferry Funeral Home.