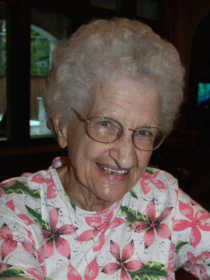 Mildred was raised in both Kansas and Missouri, but called Nevada her home having lived here for more than 50 years. She spent most of her life as a homemaker devoted to the love and care of her husband and children. She did spend a brief time as a schoolteacher in the Tiffin area just north and east of El Dorado Springs. She always enjoyed gardening and spending time playing games with the family.

Funeral services for are scheduled for 1:30 p.m., Saturday, July 19, at the Nevada Church of the Nazarene. Interment will follow in Moore Cemetery, Nevada. The family will receive friends from 5 to 7 p.m., Friday, at Ferry Funeral Home.

Contributions may be made in her memory to the Church of the Nazarene in care of Ferry Funeral.