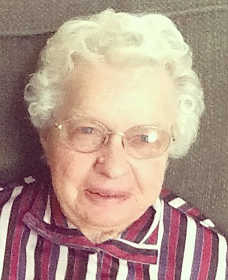 Dorothy, along with her sister Kathryn, began first grade in Glendora, Calif., then from there the family relocated to Spokane, Wash., then moved once again, this time near Nine Mile Lake. In 1929, they left Washington, traveling toward the Cross homestead in Missouri. The route included a stop off in Durango to visit Dorothy's maternal grandparents, aunts, and uncles. They remained in the Animas Valley for six weeks helping with ranch work. During that time Dorothy and Kathryn attended a rural school with their cousin, Edith Maxwell. These six weeks were the only time the Cross children ever spent with their grandparents, never seeing them again.

After moving to the homestead near Sheldon, Dorothy and Kathryn attended the rural Bellamy School from second grade through the eighth grade then graduated from Sheldon High School in 1940. They both worked on the family farm until Dorothy began teaching in 1944-45. She walked across the fields and pastures to her first rural teaching job -- about two miles at a salary of $45 per month on an eight-month term. All of her college credits were earned during the summers.

She graduated from Southwest Baptist (Junior) College at Bolivar in 1951. A few years later she graduated from Southwest Missouri State College in Springfield with a bachelor of science in education. She taught for 19 years in the rural schools of Vernon and Barton counties, then third grade in Jasper for five years and fourth grade in Lamar for five more. In 1974, she left the teaching profession and spent the next 10 years caring for her aging parents and ill sister until their deaths.

Since 1984 Dorothy had helped her brother Tom on the farm with the exception of a four-month period, which was spent helping care for an ill friend, in Lamar, who was recovering from a broken hip and other medical issues. On May 18 of that same year, Dorothy began relearning to milk cows and feed hogs and chickens -- Tom's chores -- while he had surgery. She was a longtime member of the Olive Branch Baptist Church and had also belonged to the Sheldon Baptist Church. She taught Sunday school for many years and also served on the Bellamy Community Center Board.

Special memories of Dorothy's life include two very special trips. In the summer of 1984, her brother Quincy and his family took Dorothy and Tom back to Durango for the first time in 55 years. And in 1985, Quincy's wife Margaret took Dorothy to Houston, Texas, to visit her Uncle Frank and Cousin Alberta Childress and their family. Dorothy never married and lived a life of independence, always taking care of herself yet helping others any time she could.

Survivors include two nephews, Matthew Cross and his wife, Hollee, of Sheldon, along with their children, Wyatt and Rachel; and Ray Cross and his wife, Kim, of Cedar Rapids, Iowa; and cousins, other relatives and many friends. Dorothy was preceded in death by her parents; brothers, Thomas and Quincy; sister, Kathryn; and sister-in-law, Margaret.

A memorial service for Dorothy Thelma Cross is scheduled for 10 a.m., Friday, Aug. 1, at the Ferry Funeral Home, in Nevada. Private interment will follow at a later date in the Olive Branch Cemetery.

Contributions may be made in her name to the Olive Branch Cemetery in care of Ferry Funeral Home.