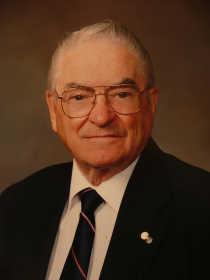 Adrian grew up on a 250 acre grain and livestock farm near the Cedar Grove community in southern Lafayette County. After leaving the farm, Adrian and Margaret started their life as entrepreneurs. Their first company was a trucking company specializing in hauling livestock to and from the Kansas City stockyards. Shortly after this successful start up, they moved on to farm machinery and an automobile dealership in Odessa, Mo. Soon they found an opportunity to move to Warrensburg and purchase into the Ford car dealership, becoming friends with A. C. "Gus" Bass, the president of the Citizens Bank of Warrensburg. From this friendship they were offered the opportunity to purchase the controlling interest of the Citizens Bank. Adrian and Margaret decided this was the opportunity they were looking for and sold their successful Ford dealership to partner Jerry Tally, farms, and other business interests to purchase the stock in the Bank.

From that first stock purchase in 1953, Adrian and Margaret continued to expand their Banking investments. By 1972, they had acquired controlling interest in five Banks in Western Missouri (Warrensburg, Lamar, Liberal, Stover, and Kansas City) and a successful Mortgage Banking business in Springfield, Mo. The family then formed Central Mortgage Bancshares, Inc. and continued to expand, acquiring the Citizens Bank, of Nevada, Mo. The final expansion took place when Central Mortgage Bancshares elected to complete a public offering allowing the company to expand in the Kansas City, Mo., banking market. In 1995, Adrian and Margaret decided it was time to slow down and recommended the company accept an offer to merge with the Mercantile Bancorp, of St Louis, Mo. At the time of the merger, Central Mortgage Bancshares, Inc. had total assets exceeding 700 million dollars.

Adrian and Margaret loved to watch sports and were long-time supporters of the University of Central Missouri sports programs. Their interest in education led them to support many academic programs and scholarships culminating with the naming of the Adrian and Margaret Harmon College of Business Administration at UCM in their honor. In addition, they supported nursing scholarships through The Research Foundation, math scholarships and graduate business scholarships through the UCM Foundation. Adrian was on the Board of Directors of Powell Gardens and supported the gardens providing the first trolley, supporting the Island Garden and Heartland Harvest Garden. Adrian supported the American Legion Missouri Boys State program from the time he joined the Citizens Bank.

He not only provided financial support, he encouraged officers and employees to volunteer their time for the week-long program. Adrian and Margaret believed in giving back to the community that provided them with the opportunity to raise their family and grow their businesses.

Services will be held at 11 a.m., Saturday, Nov. 29, at the First United Methodist Church, 141 E. Gay St., in Warrensburg, Mo., under the direction of Sweeny-Phillips & Holdren Funeral Home. A visitation will be at 10 a.m., preceding the service.