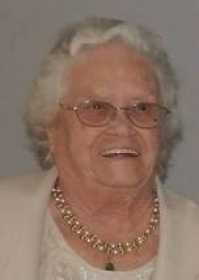 When Anna was 2 years of age, she, along with her family, moved to the St. Louis area where she attended school. Shortly thereafter, she began working and held various jobs throughout her life, including being employed at a pickle factory and a cookie factory. Early in her life she was united in marriage to Robert Lee Chilton, who preceded her in death. She later married Bud Palmer, who also passed away. Lastly, she was married to John Watts, who preceded her in death on Aug. 9, 2008.

When spare time allowed, Anna enjoyed garage sales and auctions where she could save a dollar being always known as thrifty. But her greatest love was playing Bingo -- anytime she could. She also was a fan of scratcher tickets. She was known to be feisty and always on the move if she was able. She was a member of both the VFW and Elks Club of Nevada and the local American Legion Auxiliary. She was also a long-time breast cancer survivor.

Survivors include her children, Rose Dozier and Barbara Trude, both of Nevada; sister, Evelyn Porterhouse, of Hillsboro; grandchildren, Tonya Haslag and Larry, of Bonnets Mill, and Lee Dozier, of Sheldon; great-grandchildren, Larry Joe Rusk and Rebeka Rose Rusk; great-great grandchildren, Michael and Jacob Rusk; stepgrandsons, Michael Dozier and Richard Dozier; and several nieces and nephews, other relatives and many friends. Aside from her husbands, Anna was preceded in death by seven siblings.

No formal services are planned honoring her request.