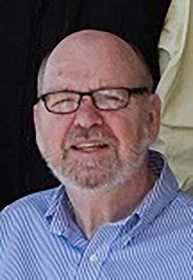 Jay Warren Borders Jr., 63, was born Feb. 5, 1952, the oldest child of Jay and Jeannette Borders. He accepted Jesus as his personal savior as a young child, and graduated from Nevada High School, in 1970.

After serving in the U.S. Navy for six years, Jay returned to Nevada with a young daughter. In 1977, he married the love of his life, Sharon (Winters) Gauthier, who also had two young daughters, and together they raised their three daughters in a loving, Christian home.

Jay was a hard worker all his life, from being a paperboy in his early years, to his Naval service, to jobs at Central States Press, and Wheatbelt Warehouse. He joined Wheatbelt in 1980 and retired from the company in March 2014 because of health issues related to Parkinson's disease, which he fought for the last 10 years of his life.

Jay graduated from Missouri Southern State College in 1985 with a degree in accounting, which he earned by going to night classes. He loved math and anything to do with numbers, and he also had a soft spot in is heart for young children, often surrounded by them at church functions and family gatherings.

Jay and Sharon worked as a team throughout their married life -- Jay coaching softball and tee-ball, with Sharon right there with him as a first-base coach. When Sharon led Girl Scouts, Jay was there for camping trips. He loved watching his daughters at school activities, and he loved being a dad. He and Sharon raised their daughters to be hard workers, to treat others with kindness and to love the Lord.

However much he loved being a father, it was perhaps being a grandfather -- a.k.a Papa -- that was his most favorite thing, and he and Sharon were blessed with three granddaughters and four grandsons who they enjoyed spoiling and spending time with whenever they could. From playing Disney princess with his oldest granddaughter, to passing his love of numbers to his grandson, to accompanying grandkids on driving practice as they got their permits, to teaching new card games or watching movies, Jay was always ready to join in on any adventures the grandkids came up with.

Though Parkinson's brought a very different retirement than Jay and Sharon envisioned, they made the best of it. During his retirement, Jay enjoyed keeping up with his lifelong favorite sports teams, the Kansas City Royals and Kansas City Chiefs, and playing chess and reminiscing with his brother, Jim. Sharon was his primary caregiver and his biggest advocate, working tirelessly to make sure his needs were met.

In addition to his loving wife, Sharon, Jay is survived by his daughters and sons-in-law, Michele and Todd Leonard, El Dorado Springs, Melissa and Rob Forester, West Plains, Mo., and Maria and Byron Hoover, Springfield, Mo.; seven grandchildren, Michele, Brandon, Connor, Garrett, Shaun, Kraysen, and Kaitlyn; his father, Jay W. Borders Sr. and his wife, Joan; two sisters, Joy Cottle and her husband, Randy, and Janet Jacques and her husband, Marc; one brother, Jim Borders and his wife, Aletta; mother-in-law, Dorothy Winters; brother-in-law, Rex Winters and his wife, Cindy; honorary in-laws, Armand and Raymona Gauthier and their children and spouses; and numerous nieces, nephews, aunts, uncles and cousins. He was preceded in death by several family members, most recently his mother, Jeannette Borders, and his father-in-law, John Winters.

Jay will be missed, but his family is grateful that he is now healed and that he is rejoicing with his Lord and savior. His legacy will live on in the lives he touched during his too-short time here on Earth.

It was my honor and privilege to write this for our Daddy. -- Maria

Funeral services will be held at 10 a.m., Friday, May 15, at Calvary Baptist Church, in Nevada, with the Rev. Terry Mosher officiating. Interment with military honors will follow in Newton Burial Park, Nevada. The family will receive friends from 6 to 8 p.m., Thursday, at Ferry Funeral Home, Nevada.

Memorial contributions may be made in his memory to the National Parkinson's Foundation in care of Ferry Funeral Home.