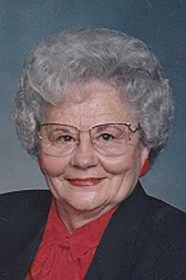 Naomi Ruth Cunningham-Cummings was called home by her Lord and Savior on June 24, 2015, with her daughter and grandson present, while being cared for at Barone Alzheimer's Care Center, in Nevada, Mo. Naomi was born March 6, 1921, to Arthur and Ida (Zeiler) York in Ballard, Mo., one of 11 children. She was baptized at the age of 16 in a pond in the Ballard area. She attended the Bethel Methodist Church in the Ballard area. She graduated from Ballard High School in 1938.

On June 20, 1941, she was united in marriage to Laurin Paul Cunningham in Baxter Springs, Kan., where her parents had moved after leaving the farm in Ballard. To this union, one daughter, Karen Ravee`, was born March 19, 1943. In 1948, the family moved to Butler, Mo., where Laurin had been hired as a mechanic at Stanley Gray Motors which later became Bitner-Stark Motors. It was at this establishment that Laurin was killed in the Bitner-Stark fire on Jan. 10, 1974, leaving Naomi a widow.

On June 22, 1990, Naomi was married to Clifford Cummings, in Arkansas, with Naomi's daughter, Karen and Clifford's two sons, Everett and Bodie as witnesses. Naomi was left a widow again when Clifford passed away July 26, 2001.

During Naomi's work life she worked at Wynes Grocery then McGuire Grocery, in Butler, for many years. She then worked at J.C. Penney Company in the office for several years from which she retired.

Visitation was held Thursday, at Ferry Funeral Home, in Nevada, from 6 to 7 p.m., on June 25, and visitation in Butler, Mo., will be held again at First Christian Church, today, from 10 a.m. until the time of the service at 11 a.m., at the church. Naomi will be buried next to her first husband, Laurin Paul Cunningham, at Oak Hill Cemetery, in Butler, Mo.

Contributions may be made in her memory to the Alzheimer's Association in care of Ferry Funeral Home.