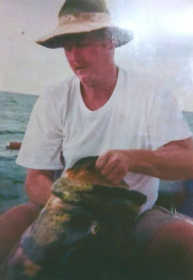 Marcus J. Moore, 53, of Sheldon, Mo., passed from this life on June 28, 2015, at St. Lukes Hospital in Kansas City, Mo. Marcus was born on Nov. 14, 1961, in Sandspring, Okla. He was the son of Phyllis and Floyd Caldwell. Marcus had a love for the outdoors. He was an avid scuba diver, fisherman, and hunter. He was a beloved son and brother. He lived life to the fullest and enjoyed every moment.

He moved at an early age to Ft. Meyers, Fla., where he attended school. After high school, he worked for Leer's Bait and Tackle for many years before going to work for Florida Power and Light, as an underwater specialist diver, building bridges. He moved to Sheldon, Mo., in 2005, where he finished out the rest of his life.

A memorial service will be held at Sheldon United Methodist Church, in Sheldon, Mo., with Pastor Wayne Coble officiating on Saturday, July 18, at 11 a.m.