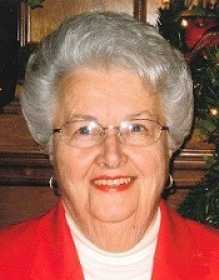 Wanda was raised in Vista, Mo., and graduated from Osceola High School Class of 1949. Following high school she lived in Nevada from 1964 until the mid-1980s. At that time she lived briefly in Roach and Tunas, Mo., before moving to Springfield in 1999 where she has continued to reside.

Survivors include one daughter, Stephanie Gilbert, Lebanon, Mo.; two grandchildren, Brian Riedy and his wife, Kristin, Springfield, and Jennifer Clark and her husband, John, Columbia, Mo.; great-grandchildren, Davis Riedy, Paige Riedy, and Hanna Riedy; and one sister, Phyllis Cross, Osage Beach, Mo. In addition to her husband, Lee, she was preceded in death by two daughters, Phyllis Ann Gilbert in 1987, and Elizabeth Gilbert in 2013; and two sisters, Floydean, and Peggy.

Contributions may be made in her memory to Mercy Hospice in Springfield in care of Ferry Funeral Home.