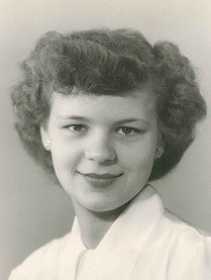 Margarette Louella Harden Kitsmiller, 83, went to be with the Lord from her home on Thursday, Jan. 28, 2016. She was born on May 2, 1932, to John Raymond Harden and Willa Rose Edson Harden.

Margarette was born and raised in Walker, Mo., and was a 1950 graduate of Walker High School. Upon graduating from high school, she moved to Kansas City and worked for Hallmark Cards. She married Donald James Kitsmiller on June 27, 1953. After moving back to Vernon County she was a housewife, mother, and was employed in the Accounting Department at Citizens State Bank, Nevada, Mo., from which she retired. She was a long-time member of First Christian Church of Nevada, Mo.

Funeral services will be held at 10 a.m., Monday, Feb. 1, at First Christian Church, Nevada, with the Rev. Bill Platt officiating. Interment will follow in Mt. Vernon Cemetery, Walker, Mo. Friends may call now and until the hour of service and family will receive friends on Sunday, Jan. 31, from 5:30 to 7:30 p.m., at the funeral home.

Memorials are suggested to the Mt. Vernon Cemetery in care of Ferry Funeral Home, in Nevada.