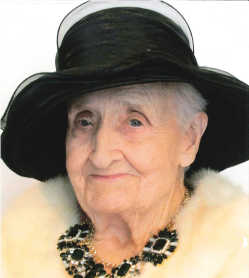 Dorothy moved with her family from Kansas to St. Clair County at a young age and attended school there. Following her marriage to Ferman they came to the Nevada area in 1934, where she had lived ever since.

Dorothy was a farm wife and was very active on the family farm where she was involved in gardening, milking the cows, and working wherever she was needed with her husband. Dorothy also drove a school bus for the Nevada R-5 school district for 14 years, and in times of bad weather drove a one-horse mail buggy for local mail delivery. She had been a member of the Milo Baptist Church, in Milo, since 1942, where she played the organ for 65 years and was very active in numerous church activities.

Dorothy is survived by one son, Lawrence E. Tally and his wife, Pat, of Nevada; one grandson, Brian Lynn Tally, Nevada; four great-grandchildren, Brett, Chloe, Austin, and Ashley; and numerous nieces and nephews. In addition to her husband, Ferman, she was preceded in death by four brothers, Charles, Lester, Roy, and Kenneth Reasoner; and one sister, Fern Teague.

Funeral services will be held at 2 p.m., Tuesday, May 17, at Ferry Funeral Home, in Nevada. Interment will follow in the Milo Cemetery. The family will receive friends from 1-2 p.m., prior to the service.

Contributions may be made to the Milo Baptist Church in care of Ferry Funeral Home in her memory.