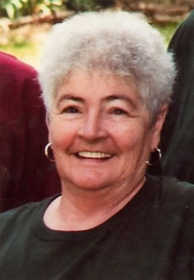 Karin came to the United States in 1968 when she came back with her husband, Rex. Five years later she became a United States citizen. Karin worked as a nurse's aide at Nevada City Hospital for two years and then began employment at Key Work Clothes where she continued to work for 15 years. She later worked for an additional year at Ortho Flex. Karin especially enjoyed traveling with Rex and going camping at Stockton Lake.

In addition to her husband, Rex, of the home, survivors include two sons, Frank Morsch, Sulzbach, Germany, and James Glass, Nevada; one daughter, Kristie Kimzey and her husband, Randy, Bronaugh, Mo.; two grandchildren, Amanda Kimzey, Ozark, Mo., and Korey Kimzey, Bronaugh; and several nieces and nephews in Kentucky and Germany. She was preceded in death by her parents and one brother, Rolf Morsch.

A memorial services will be announced at a later date.