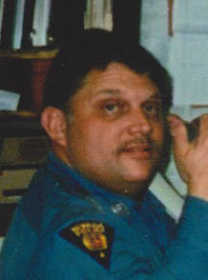 Ted Wayne Williams, 64, Nevada, a former officer of the Nevada Police Dept. for 27 years, passed away on Sept. 28, at Freeman West in Joplin. Ted was born Nov. 17, 1952, in Ft. Scott, to Lewis Richard and Nelda Undine (Shipley) Williams.

Ted was raised in Ft. Scott and attended school there graduating from Ft. Scott High School in 1970. Following high school he attended Pittsburg State University, and Ft. Scott Community College. Ted was a police officer in Pittsburg, Kan., for three years before coming to Nevada in 1982. For the next 27 years, he was employed as an officer of the Nevada Police Department. Ted enjoyed the outdoors, fishing, riding motorcycles, barbecue and cooking. He was also involved in martial arts, and weight training. Ted was a Masonic Lodge member in Pittsburg, Kan. He attended St. Paul Lutheran Church in Nevada.

Survivors include one son, Kevin Williams and his wife, Bethia, Carthage, and their daughter Suzanne; one daughter, Kari (Williams) Mills and her husband, Gary, Perry, Ga., and their children, Emma Ellis, Madelyn Ellis, Braden Ellis and Alyvia Mills; Ted was a special great-uncle to J.R., Randy and Erik DeLaney, and Krissie Cherry and her husband, Joe. He is also survived by a special friend since eighth grade, Larry DeLaney and his wife, Sam, Nevada; his mother-in-law, Jeanne Craig, Nevada; numerous nieces and nephews and great-nieces and nephews. He was preceded in death by his parents.

Funeral services will be held at 10 a.m. on Thursday, Oct. 5, at St. Paul Lutheran Church in Nevada with the Rev. Chris Deines officiating. Interment will follow in Mt. Orum Cemetery in Redfield, Kan. The family will receive friends from 9:30 to 10 a.m. prior to the service at the church on Thursday.

Memorials are suggested to the Lewis and Nelda Williams Scholarship Fund at Ft. Scott Community College, in care of Ferry Funeral Home in Nevada.