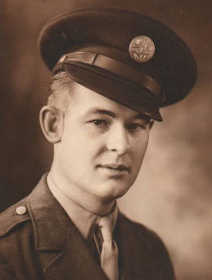 Harlan grew up on a farm in rural Walker and graduated from Walker High School in 1939. He served in the United States Army Air Corp during World War II from Sept. 29, 1942, thru Oct. 19, 1945. Harlan trained as a tail gunner and was involved in European, African, Middle Eastern theaters. Shortly after entering the service his plane was shot down in Germany and he became a P.O.W.

Following time in the service, Harlan returned to Walker where he farmed and operated a dairy until 1959. At that time he came to Nevada and began working as a carpenter; he also worked for a time in Kansas City in the steel industry. For an additional seventeen years Harlan worked at the Nevada State Hospital until his retirement. Harlan also owned and managed several rental houses in Nevada. He was a member of the First Baptist Church and a past member of Gideons International.

Funeral services will be held at 10:30 a.m. on Tuesday, Dec. 26, at Ferry Funeral Home in Nevada with Hubert Fox officiating. Interment with military rites will follow in Newton Burial Park. The family will receive friends from 9:30-10:30 a.m. prior to the service at the funeral home.

In lieu of flowers, those who wish may contribute in Harlan’s memory to the Lottie Moon Christmas Offering at First Baptist Church or Gideons International care of Ferry Funeral Home, 301 S. Washington, Nevada, MO 64772.