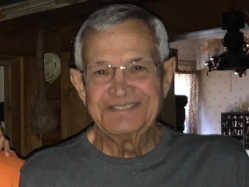 He was born on Dec. 23, 1940, to Carley and Alta (Swope) Jones of Rich Hill, one of eight children. Ken was a veteran of the United States Navy and was employed by RadioShack for 50 years, retiring as the company’s most tenured employee in 2017. Ken was a loving husband, father, granddad, brother, uncle and cousin. He was loved by all who had the honor of meeting him.

His wicked, sharp sense of humor and capacity for love is his legacy, and lives on in all of us.

There are no funeral arrangements at this time. Memorial suggestions may be directed to Carbon Center Cemetery in care of Ronald Bolser.