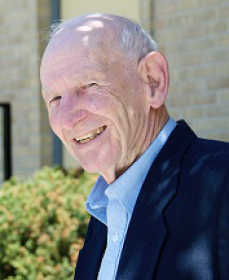 Herbert “Alan” Hoover, 80, Nevada, passed away on Wednesday, March 14, at Barone Alzheimer’s Care Center in Nevada. Alan was born April 14, 1937, in El Paso, Texas, to George Edwin and Dorothy Elizabeth (Kingsbury) Hoover. On Aug. 27, 1960, he was united in marriage to JoAnn “Jody” Medsker in Carthage, and she survives.

Alan was raised in Carthage and graduated from Carthage High School Class of 1955. He attended Pittsburg State Teachers College in Pittsburg, Kan., and later got his Master’s Degree from Central Missouri State University in Warrensburg. For eight years Alan was a teacher and coach at Ray-Pec High School before coming to Nevada in 1968. From 1968 until his retirement in 1991 Alan taught and coached in Nevada. In his spare time, he enjoyed playing golf and fishing.

Visitation will be held from 5-7 p.m. on Monday, March 19, at Ferry Funeral Home in Nevada.

In lieu of flowers those who wish may contribute to the Alzheimer’s Association in care of Ferry Funeral Home.