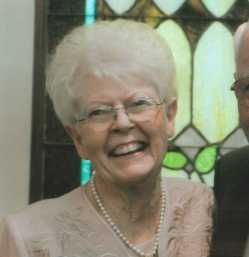 Virginia Evelyn Potter, 86, Nevada, passed away on Sunday, May 6, at Moore-Few Care Center in Nevada. Virginia was born March 4, 1932, in Jackson County, Mo., to Olin E. and Iva Ruth (Kincaid) Reynolds. She married Norval L. Potter on April 13, 1951, in El Dorado Springs, and he survives of the home.

Virginia accepted Christ into her life at the age of 16. She was an active member of the Willard United Methodist Church in Willard, Mo.

Virginia’s early years were spent in St. Clair and Cedar Counties in Missouri. She and her immediate family lived in Nevada from 1951 to 1994. She and Norval relocated to Greene County near Willard to be closer to their daughters and their families. In the summer of 2016 they moved back to Nevada.

Virginia worked as a legal secretary for many years with the Ewing Law Firm, Russell, Brown and Breckenridge Law Firm as well as with Farm & Home Savings Association of Nevada. Her most recent work was as the executive secretary for the Finis M. Moss Charitable Trust.

Virginia’s family has always been very important to her and she strived to be a good wife and mother. She exceeded in both of these and will be greatly missed. Virginia will always have a special place in each of the family’s hearts as well as each person that ever met her.

In addition to her husband Norval, she is survived by two daughters and their families, Carol and Mark Handly, of Leeton, Mo., Janet and Gregg Fritter, of Ash Grove, Mo.; two granddaughters and their families, Heather and David Vestal, Katie and Matthew Fletchall, both of Nevada; one great-grandson, Kaleb Vestal; four great-granddaughters, Kylee and Kourtnee Vestal, and Hadley and Haizleigh Fletchall, all of Nevada; two nephews, Larry Potter, Nevada, and Terry Potter, St. Charles, Mo.; one sister-in-law, Darlene Hiebert and her husband Raymond, and their children, Steven, Mary Ann, and David, all of Sheldon; and numerous cousins.

She was preceded in death by both of her parents; step-father, Joseph Nicholas; brother-in-law, Oden Potter and his wife Judy; and two nephews, Jerry Potter and Daniel Hiebert.

Funeral services will be held at 11 a.m. on Thursday, May 10, at Ferry Funeral Home in Nevada with the Rev. Sharon Freeman officiating. Interment will follow in Sheldon Cemetery. The family will receive friends from 10-11 a.m. prior to the service at the funeral home.