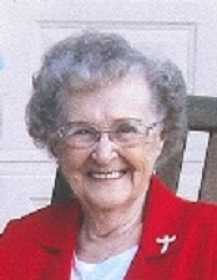 Melba was raised in the Metz area and graduated from Rich Hill High School at the age of 16. She attended business college in Kansas City for two years. Melba worked various jobs but worked most of her life as an Avon sales representative where she earned her 50-year pin. She lived most of her adult life as a resident of Nevada. Melba enjoyed spending winters in Arizona with Ray, she was an avid bowler and loved square dancing. She was also a longtime member of the Elks Does.

Funeral services will be held at 10 a.m. on Friday, May 11, at Ferry Funeral Home in Nevada with Pastor David Rorabaugh officiating. Interment will follow in Greenlawn Cemetery in Rich Hill. Friends may call now and until the hour of service at the funeral home.