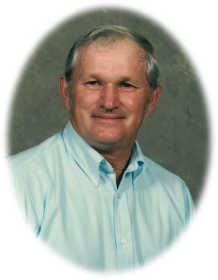 Orval Murl Moore, age 78 of Schell City, the son of Murl John and Pauline Grace (Reynolds) Moore was born Feb. 23, 1940, in Fair Haven Springs, Mo., and passed from this life at 2:20 p.m. Wednesday, May 30, at his home. Orval attended school in both Harwood and Walker, then high school in Schell City where he was a member of the Class of 1958.

After graduation, Orval began employment with the Gault-Moore-Stevens Company as a member of the brush crew that opened the way for the dial phone system. Later he worked for CBK Industries, before being hired as a tractor mechanic for P&B Allis-Chalmers in Nevada. On Dec. 12, 1964, Orval was united in marriage to Linda Lane Hutsell at the home of Pastor Fred Blystone in El Dorado Springs. Their union was blessed with one daughter, the light of their lives.

In the mid-1970s Orval decided to begin farming full time on his own and became fully engaged in row crop as well as cattle farming. And of course, he worked with horses, one of his lifelong loves. In addition to his great love of horses, he was also gifted with a great mechanical ability which served him well his entire life when one takes into consideration that he also always loved motorcycles and old cars. He actually built his first “motorized” lawn mower with an old washing machine motor — it was a short-lived success since it blew up almost immediately — but he was only about 12 years old at the time. It was at about that same age that a “Wizard” motorized bicycle caught his eye at the Western Auto store in El Dorado Springs. He worked for a year doing whatever odd jobs he could find to make money to purchase that bike, and returned to find the bike still in the window ready for him to purchase.

Orval was a friend to so many in this community, from school friends in the area to horse sales with Rex Diehl, and coffee with Doyle Brown, Bub Fox, Bobby Scotten, Gary Charles and too many others to mention at Tillie’s. And he played shortstop and third base with the “Bums,” but Orval’s biggest impact was the love that he had for his family. He and Linda have been married more than 53 years, He and his daughter Kelly shared a love of horses and everything in life. Then there is his love and respect of son-in-law, Jeremy, and how about that special grandson, Chance — they always shared a great love of sports and one another, memories to last a lifetime. Orval was also a tireless volunteer, serving on the Fair Haven Park Board, and was a founding member of the Osage Riders Saddle Club as well as belonging to the Kaysinger Circuit where he had served as past president. He was also a member of the Harwood Methodist Church but had more recently attended the Harwood Baptist Church.

Survivors include his wife, Linda of the home; daughter, Kelly and her husband Jeremy, of Schell City; grandson, Chance Mays, of Springfield; brother, Jerry Moore and his wife Shirley, of Harwood; brother-in-law, Mike Hutsell, of El Dorado Springs; and nieces, nephews, other relatives and so many friends. Orval was preceded in death by his parents; his sister, Betty Jean Holt; and his brother-in-law, Kenneth Holt.

Services were held at 10:30 a.m. on Saturday, June 2, at the First Baptist Church in Schell City with Brother Doug Reynolds officiating. Interment was in the Green Mound Cemetery in Harwood.