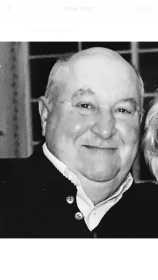 Jim was raised in the Arthur area in Vernon County and graduated from Rich Hill High School. He served in the U.S. Navy for several years where he became a pilot. Following the service he attended the University of Missouri in Columbia and graduated with a degree in physical education. Jim worked for the Vernon County Agricultural Stabilization and Conservation Service Office and then the State of Missouri ASC Office in Columbia retiring after 32 years. Jim returned to Vernon County in 1996 to resume pecan farming which he continued to this day.

Survivors include his children, grandchildren, great-grandchildren, and numerous nieces and nephews. He was preceded in death by his parents, two brothers, two sisters and one grandson.

Funeral services will be held at 2 p.m. on Wednesday, June 27, at Ferry Funeral Home, Nevada. Interment with military rites will be held in Greenlawn Cemetery, Rich Hill.

Memorials may be made in Jim’s memory to Greenlawn Cemetery in care of Ferry Funeral Home.

Friends may call now and until the hour of service at Ferry Funeral Home.