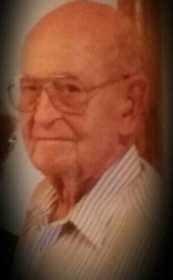 Herb attended school in Nevada and left school early at the age of 17 to enlist in the United States Army. Herb was a World War II Veteran where he served in the Pacific Theater for two years being assigned the task of overseeing a jeep motor pool. Following his time in the service he returned to Nevada where he began working at Gotschall’s Laundry and also Gotschall’s DX Service Station. Herb later became a partner in M&M Motor Supply in Nevada which he continued until his retirement in 2001. Herb was a member of the Nevada Elks Lodge No. 564 in Nevada. He loved traveling and vacationing with Opal for many years, was an avid quail hunter, and in his later years enjoyed taking care of his cattle.

Survivors include his daughter, Elaine O’Rear and her husband, Darrell, of Kansas City, Mo.; his son, Timothy Gotschall and Stephanie of Nevada; seven grandchildren; six great grandchildren; one sister, Ada Edson and her husband, Fred, of Muskogee, Okla.; and numerous nieces and nephews. He was preceded in death by his parents; two sisters, Helen Shrewsbury and Lois Rich; and one brother, Stanley “Pete” Gotschall.

Funeral Services will be held at 11:30 a.m., Thursday, Feb. 21, at Ferry Funeral Home in Nevada. Interment with military honors will follow in Newton Burial Park.

Contributions may be made in Herb’s memory to the Alzheimer’s Association in care of Ferry Funeral Home. The family would like to express their gratitude to Karen, Amy, Janetta, and the staff at Joe Clark Residential Care for the wonderful care and kindness they received.