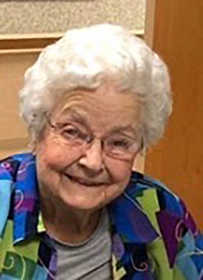 Virginia Lorene Johnson, 89, Deerfield, Mo., passed away on Monday, Feb. 18, 2019, at Moore-Few Care Center in Nevada. Virginia was born on Jan. 10, 1930, in Deerfield, to Curt and Irene (Klontz) Weber. She fixed her eyes upon a certain handsome fellow named William C. “Bill” Johnson on the school bus and eventually she became his girl, and they were married on Nov. 25, 1948, in Nevada, and he preceded her in death on March 3, 2012.

Virginia was raised on the family farm just north of Deerfield. She always obeyed the rules and was thankful for strict parents and teachers. Virginia graduated from Nevada High School then worked as a secretary for a real estate business and Crain Insurance Agency in Fort Scott, Kan. She eventually bought the Adkins Insurance Agency in Fort Scott which she ran for 15 years.

Donations may be made in Virginia’s name to the Deerfield Cemetery in care of Ferry Funeral Home.