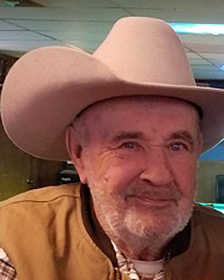 Paul attended Sheldon High School. He married Joyce Liter and they had a son, Rick Holland. In Paul’s early years he worked in uranium and coal mines in New Mexico. Later, he graduated from barber school and was a barber in the Joplin area.

Paul was a construction superintendent for the Judy Co. and Corp of Engineers and worked on multiple projects including Crown Center in Kansas City and Exxon Colony Oil Shale. Upon returning to the Sheldon area, Paul owned and operated his own dozer service. Later he worked alongside his brother driving over road trucks until health complications caused him to stop.

Paul was a longtime member of the Eagle Lodges. He will be deeply missed for his outgoing ways. He enjoyed dancing, fishing, and hunting with family and friends.

Paul is survived by his three sons, Rick Holland, Todd England, and Brent Holland; Ginny; a sister, Darlene Doolin; and several grandchildren, nieces, and nephews. In addition to his parents, Paul and Nora Alline Holland, Paul was preceded in death by his brother, Charlie Holland; and his sister, Pauline Geyer.