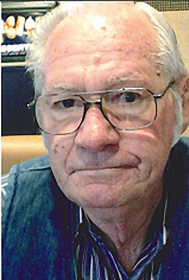 David grew up in Stockton and graduated from Stockton High School Class of 1953. Following high school he served in the United States Army as a truck driver while stationed at Ft. Eustis, Va. David worked 33 ˝ years at the Nevada State Hospital and also at Mrs. Murphy’s Laundry for 27 years. He enjoyed traveling, fishing, and spending winters in Texas during his retirement years. He and Alma have resided in Nevada since 1959. David was a member of the Calvary Baptist Church in Nevada.

In addition to his wife, Alma, he is survived by one daughter, Misty Miller and her husband, Richard, Nevada; one son, Kendall Stroer and Kelly Fitzpatrick, Nevada; three grandchildren, Tiffany Stroer, Cody Miller, and Kristal Miller, all of Nevada; one great-grandchild, Alexa Stroer; and one brother, Marion Stroer and his wife, Jill, Douglasville, Ga.; several nieces and nephews, and many friends. He was preceded in death by his parents; one sister, Betty Horning; and one brother, Gerald Dean Stroer.

Funeral services will be held at 3 p.m., Monday, Aug. 26, at Ferry Funeral Home in Nevada with Ray Dean Scism officiating. Interment with Military Honors will follow in Newton Burial Park in Nevada. The family will receive friends from 6 to 7 p.m., Sunday, at the funeral home.

Memorials are suggested to the Nevada Senior Center in care of Ferry Funeral Home.