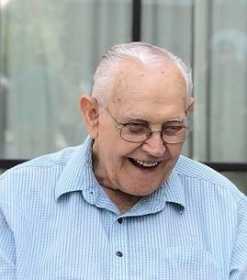 Lawrence Maxwell Greer, of Milo, Mo., passed from this life on Jan. 6, 2020. He was born on July 31, 1930, as the eldest of five children to Harold (Pete) Maxwell Greer and Cora Ellen (Hieronymous) Greer in Sheldon, Mo. Lawrence was united in marriage to Marilyn Yvonne Forkner on June 1, 1962. Marilyn preceded him in death on March 14, 2012.

Lawrence attended Wild Rose elementary school and was a graduate of Sheldon High School. After High School he worked several different jobs thoughout the U.S. Lawrence joined the United States Navy on Nov. 4, 1950, where he served four years during the Korean War on a fleet tugboat and later on the USS Passumpsic oil fueling vessel as a Gunner’s Mate Second Class. Upon being honorably discharged from the Service on Aug. 18, 1954, Lawrence came back to Milo and ran a gas station for a short time before purchasing the general store in Milo and operating it for approximately 15 years. He was also a substitute rural letter carrier during that time and became a full-time rural letter carrier in 1978. Lawrence also enjoyed raising hogs for his brother-in-law, Everett Forkner. Lawrence retired from the Postal Service in 1992.

Lawrence was involved in many organizations throughout his lifetime. He was a long time Deacon then Elder at the Rinehart Christian Church where he faithfully attended every Sunday until his passing. Faith and family were always his top priority and he lived his life serving others. Lawrence loved helping people and was an active member of Habitat for Humanity, the Sheldon Lions Club, the Milo Rural Fire Department of which he was a founding member as well as several other philanthropic organizations throughout his life. Lawrence and Marilyn enjoyed traveling and spent many years attending both the state and national Rural Letter Carrier Association conventions. Lawrence visited all 50 states throughout his lifetime, finally checking North Dakota off his list with a family road trip in 2018. Lawrence loved spending time with his family and was so very proud of all of his grandkids.