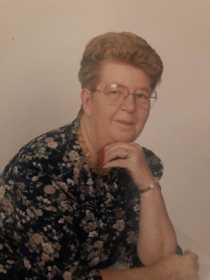 Ethne Florence Miller-Daniel passed away peacefully on Jan. 20, 2020, in Colleyville, Texas, eight years to the day and almost minute of the passing of her beloved husband the Rev. Eldon C. Daniel. Ethne was born March 21, 1926, in Dublin, Ireland, and led an adventurous life. Born to the Miller family, she was taken to Dr. Barnardo’s Home for Children in London, England, at the age of 3, where she lived until she was 18.

During her childhood at Dr. Barnardo’s she witnessed the bombing of London in World War II and was taken under cover of night to the safety of the English countryside, where she met and lived with the Giles family for a time. Ethne would remain close to the Giles family for the rest of her life and maintained a lifelong friendship with Kathleen (Giles) Goddard of Diss whom she loved as her chosen sister.

Ethne trained to be a nanny at Barnardo’s, eventually taking a job with an AP correspondent and his wife as a nanny to their two boys. At their request she left her beloved England in 1951, crossing the ocean alone on the Queen Elizabeth to rejoin the family in the states and forge a new life for herself in the U.S. The family settled in Evanston, Ill. It was there that Ethne met her husband Eldon. They married in 1954 and went on to raise four children and move all over the U.S., counting Illinois, Wisconsin, Kansas, Missouri, Florida and Texas as home.

An advocate of the Montessori method, Ethne made a career of her love for children. She served as the founding director of Vernon County Day Care in Nevada, Mo., from 1969 to 1978. In 1978, she opened her own business, Mother Goose Day Care in Joplin, Mo., ultimately expanding the enterprise with an additional location before selling it in 1984. Many of the children she cared for knew her as “Mother Goose.” Ethne was a well-loved community leader in Joplin through her business contributions and involvement in the Soroptimist Club.

She continued working into her 80s in Florida where she worked at Bellaire Montessori Academy and in Colleyville, Texas, at the former Barbara Gordon’s Montessori School.

Ethne was always the life of the party. She was recognized for her British accent, energetic spirit and fun loving personality. She touched and improved the lives of literally thousands of children during her lifetime.  She will be deeply missed by her friends and family.

A private family memorial service will be held at a later date. Donations to the Alzheimer’s Association are requested in lieu of flowers.