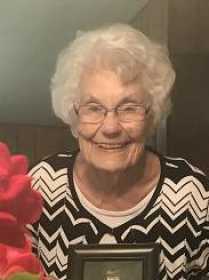 Elsie grew up on a farm in Long Lane and graduated from Buffalo High School Class of 1939. Following high school, she attended Southwest Baptist University and received a teaching certificate in 1941. She then attended Oklahoma Baptist University. After college she taught at the Flag Pond School (a one room schoolhouse near Long Lane), in Conway, Mo., and in Boonville, Mo., where she met her future husband. Following her marriage to Buzz, they resided in Everett, Wash., for 18 years before coming to Nevada in 1966. In Nevada, Elsie was primarily a homemaker, and in later years taught at the State School, and volunteered at the Moss House for several years. Elsie was a member of the First Baptist Church where she enjoyed teaching Sunday School. She especially loved being with her family and was an avid fan of her children and grandchildren’s many sport activities.

Funeral services will be held at 10 a.m., Saturday, March 7, at the First Baptist Church in Nevada with Pastor Kevin Daugherty officiating. The family will receive friends from 6 to 8 p.m., Friday, March 6, at the church. Interment will be held at the National Cemetery in Fort Scott on Monday, March 9, at 10 a.m.

Memorials are suggested in her memory to the Nevada R-5 Foundation Scholarship Fund in care of Ferry Funeral Home.