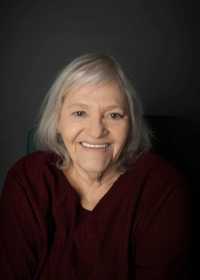 Donna LaVaughn (Spangler) Lear, formerly of Sheldon, Mo., 77, passed away in her sleep at her residence near Washington, D.C., after a courageous battle with cancer on March 26, 2020. Since the cancer died along with her, we could call it a “tie."

In her last year of her life she checked off many things off her bucket list while fighting leukemia and did it with a beautiful smile on her face. She enjoyed getting to see Fords Theater, Fort Hunt, a Frieda Kahlo painting, several Smithsonian Museums, and seeing herself in history as if she was there.

Donna was born on Feb. 14, 1943, to Donald Spangler and Rita (Redwine) Spangler in Missouri. As the oldest, she naturally took it upon herself to be the boss and held that title until the end. Her remaining siblings and cousins could attest to that.

She was born a natural storyteller and never met a stranger that she couldn’t charm within minutes with stories of her youth and her ideas of alien presence in this world. She always had something to say and most likely would always get the last word. Donna never met a rule that she didn’t think she could break, a boundary that she wouldn’t try to cross and a story that she couldn’t stretch even just a little. She was anything but common!

Donna met and married James Lear in 1969 were they combined their children into a modern day Brady Bunch. They both maintained throughout their lives that it was love at first sight and remained married until Jim’s death in 1998. Donna remained unmarried as she simply stated no one could ever measure up.

Donna was highly proud of the fact that she held many interesting jobs during her life, from a go-go dancer, union rep to a truck driver but the job she loved the most was being the wife of James (Jim) Lear and the mother to the small football team that their combined kids totaled. 13 children were a lot of kids, but it made all of us grateful for the things we did have as we know that they didn’t come easy.

She is preceded in death by her loving spouse James “Jim” Lear, her children Tony Lear, Tammy Lear, Teresa Lear and Tommie Lear. Her grandchildren Amy and Colton Spencer, and her brothers Norman and Eddie Spangler.

Due to the current conditions of the quarantine in effect, Donna’s memorial service is delayed until we can hold arrangements for her in a proper manner. She will eventually have her ashes buried next to Jim in Sheldon, Mo., least we be haunted for the rest of our lives.

In lieu of flowers, donate to your local humane society or cancer society.