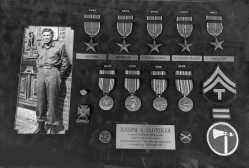 Joseph was drafted into the United States Army October 22, 1942, where he fought in five Campaigns of World War II – Normandy, Northern France, Central Europe, Rhineland and Ardennes as a Radio Operator. He was awarded several medals including five Bronze Stars and a Good Conduct Medal. After being Honorably Discharged from the Army, he worked as a carpenter and Construction Superintendent for Bennett Construction Company in Kansas City, MO for 53 years. Following his retirement, he farmed and raised cattle outside of Nevada, MO full time.

The family is requesting, in lieu of flowers, donations be made to St. Jude’s Children’s Hospital c/o Ferry Funeral Home in Nevada. You may view obituary and send condolences online at www.ferryfuneralhome.com