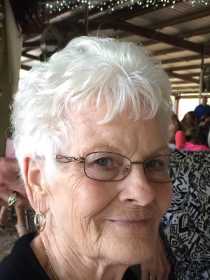 Pat lived in Kansas for a time while growing up. She attended school in Bronaugh and graduated from Nevada High School in 1956. She worked for Key Work Clothes all of her working years, retiring in 1999. Pat attended United Methodist Church. She was actively involved with the church Bizarre, and the Habitat for Humanity Luncheon.

Private graveside services will be held at 2 p.m., Monday, April 27, at Newton Burial Park, in Nevada, with the Rev. Sharon Freeman officiating. Friends may call from 2 until 7 p.m. on Friday, 9 a.m. until 1 p.m. on Saturday, and noon until 4 p.m. on Sunday. A Celebration of Life will be announced at a later date.

Memorials may be made in her memory to Breast Cancer Research Foundation in care of Ferry Funeral Home.